The waitress thumbed the tacky sticker that covered the bottom half of my driver’s license, its fading black letters much harder to read since I smoothed on the adhesive label four years ago.

She probably thought my ID was fake. And she was partially right.

At the time, that address wasn’t “real.” If she had driven to that location, she wouldn’t have found me there. A Google Map search wouldn’t have led her to a brick façade house, a white walled apartment or a shiny chrome trailer. If she had entered those numbers into a GPS, she would have arrived to a 4-by-5 inch copper box at a mail delivery center.

A card that easily slips into your back pocket, sinks to the bottom of your purse, gets run through the washing machine, on occasion.

A card with a finger-print-sized photo immortalizing a moment from your 16th year, an image that’s somehow supposed to represent you for another eight – past graduations and diplomas and first loves and first jobs.

A card that tries to capture you -height, weight, date of birth, like you’re appearing on a list of football stats- and in those details, manages not to capture you at all, leaving you like a plastic doll, hollow and without the chance to grow beyond the size set by dials on a machine.

Some identification that is…

Back to that sticker. The one that’s been smudged on my ID.

Maybe I shouldn’t call it a sticker, because when I think of stickers, I think of the purple- and pink-colored zebra ones you put all over your binder when you were in middle school.

I haven’t ever considered this to be one “fun.” It’s been more of a reminder of what it covered -the address of a house that was once home- filled with memories, the best closets for hide-and-go-seek, a kitchen that constantly smelled of cinnamon-laced beef stew and paprika-dusted mushroom soup. 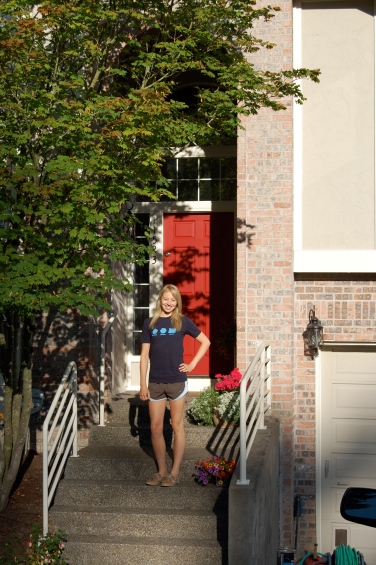 Last day with my childhood home

During these four years living with that ID sticker, I’ve learned that a house doesn’t necessarily equal a home, that home can be found on a sunny patch of grass on a January morning, or around a sauce-splattered table, even in a smile from the neighborhood fruit vendor.

So I suppose the numbers on any ID don’t really amount to much. But if I’m being honest, they mattered to me because I let them matter – because I gave into worship of those numbers, gave them tears and a shaking fist and words I wouldn’t say in my grandmother’s company.

But those numbers would give me something. And for that, I’m thankful.

Memorable moments in front of the house – first day of school.

I placed my ID in the center of my kitchen counter, hovering above it, staring at its smallness.

‘How should I do it? My fingernail? Scissors?’

A bigger tool seemed more appropriate, something to sever it, something that would make the slate clean, leaving behind no trace of residue, no gunky splotches.

I reached into my toolbox, sifting through the nails and drill bits until I found it: a paint scraper.

Before I began the cosmetic operation, my smile was already quite large, the years leading up to this day turning a simple act into what I assumed would be a momentous occasion.

I rammed the sticker’s edge with the edge of the paint scraper, driving it with more and more force until a trace of white began to peel away. With barely enough material to cling to, I started to pull, ever so slightly. This was meant to be a clean clip, not a dozen sticky scraps.

As pinched fingers moved forward, the sticker was lifted from the card, my smile stretching even wider, until the sticker took its last breath. Curled around my index finger, it looked so lifeless, so unimportant.

Because the sticker was just a formality, just a detail to record me in the system. And the numbers on the sticker were evidence of a liminal space until the day when I would be given another place to call home.

And after the waiting, the prayers, that day arrived.

During my years of longing, I would never have guessed that a gentle Heavenly Father had such an earthly dwelling in mind for me – a safe place to rest my head, to share meals, to offer a couch to a friend for the night. Even if the place is only home for a few months or a year or a several years, all that matters is that for this day, it is my gift of home.

Looking back at the years of wondering, I now know there was no place for worrying or shame. Because He had me. He always had me. He will forever have me.

A house might be four walls, but home is so much more than physical foundations. Austria, Taylor Smith.

For God’s plan for our lives is too big to be written on a sticker, too awesome to fit on an ID card, too wonderful to be written in numbers.

Silently, rather un-momentously, the sticker floated into the garbage can, clinging to the side of the plastic trash bag.

One response to “Identification”