It’s a word I use somewhat often. Sometimes it’s a good substitute word to talk about our hopes; sometimes it suffices to talk about what we anticipate; most times we use it to describe what we think others should do for us or what we feel we must do.

This summer, I can to camp with expectations, even when I tried my hardest not to have any. When I sat down in the coach class of my Lufthansa flight, my mind was filled with thoughts on what I thought would happen this summer.

I hope that the campers in my English classes will like my lessons and participate in the activities I’ll have planned. I hope I have the chance to share my story to some of the campers and that they’ll be able to see how the power of God’s love is so transformational. I hope that I’ll be welcomed by the Czech communities – that I will be met with kindness, even by people who have never met me and who might believe things completely differently than me.

While I wouldn’t say it’s bad to hope or wish for those things, having expectations is limiting. Even when we believe our expectations are “good,” or “healthy,” when we fix our minds on what we think should happen, we deny the possibility of accepting what could be…  If we always assume what we want is best, we harden our hearts to what God might haven in store for us.

Going into our last English Camp in Zábřeh I knew that this camp would be different from our first camp. A majority of the campers in Zabreh were non-believers, and knowing this, I had the expectation that the students would be actively questioning and talking about the Gospel as we shared it throughout the week. I hoped that some campers would give their lives to Christ and I had an image about what that might look like.

During the week, I roomed with three wonderful, beautiful girls. One was the leader of the Zábřeh youth group who we partnered with to lead the camp. Another girl said she was Christian but that she is trying to figure out what it means to live out a Christ-focused life amidst a generation that often has different ideals than what is written in the Bible. The last girl (who became my closest friend at camp) told me that she talks about spirituality, but she had never read the Bible or thought much about Christianity.

From a person who has struggled with love shown through physical touch, I wasn’t expecting that hugs, laying hands in prayer and holding girls as they cried, would be part of my time here in Czech. But this last camp, my ideas of what might happen at camp were completely different from what I could have ever imagined. Sometimes it wasn’t the words that mattered the most – it was the power of physical touch and closeness that spoke the loudest.

I never expected that I would grow in this way – of seeing myself as a nurturer and comforter – but I realized that through this new role, God was revealing to me how He is the ultimate Comforter. He gently guides us as He is our Shepherd and holds us in His embrace as our Father.

At the end of camp, my closest friend and roommate asked if she and her family could host me for our two- day follow-up after the end of camp. It’s a wonderful opportunity to continue the spirit of community created throughout the week and a great chance for Americans to experience what life is like for the students in their own homes.

Spending the day with my new friend was wonderful. That evening, as we were eating dinner, I had the chance to talk more about God and to talk to her mom about her faith. At the end of our conversation, I asked her if she wanted to join us for church the next morning. At first, she hesitated, but when the morning came, she decided that she wanted to join us.

I wasn’t quite sure what to expect for their reactions about church. Would they think the church was welcoming, too liberal, or too much? Would they see this church as a community they could be part of – would they want to come back again, or immediately decide that Christianity was something they didn’t want to believe in?

When we sang worship songs, my new friend and her mom stood with me. They sang along to the songs and bowed their heads when we prayed. They nodded their heads when the pastor gave his sermon and when he asked us to stand if we believed in the full love of Christ they stood up with me!

After the service, my friend’s mom took my hand and pulled a gold ring off her finger – a ring she had worn for 20 years. She placed it on mine and told me that it was a reminder of how God’s love is everywhere and how God dwells within each of us. Later that day, my friend told us how she had started to read the Bible for the first time and that she was excited about it, too!

Her love and kindness was far more than I could have ever expected. While I don’t know what their walk with the Father will look like, I know that whatever I could expect it to be would not even come close to the plans God has in store. My projection would only limit the possibilities that God can create. Nothing is impossible for Him.

What a truly beautiful end to my second English Camp in Czech. 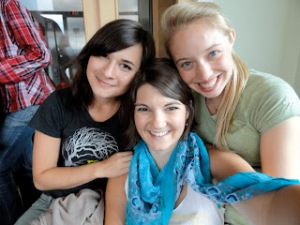